Edward Cullen is back... 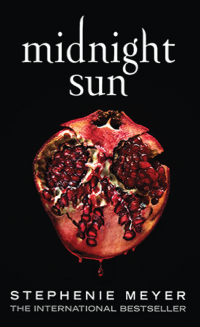 Pre-order your copy now from Whitcoulls, The Warehouse, Mighty Ape or talk to your local bookseller - find your closest one.

“It feels strange to be making this announcement when the world is suffering through a pandemic, and no one really knows what’s next. I thought seriously about delaying this announcement until things were back to normal; however, that felt wrong, considering how long those who are eager for this book have already waited. I know how much I personally need distractions right now, how much I need something to look forward to, and most of all, how much I need more books to read. So, I hope this book gives my readers a little pleasure to anticipate and, after it arrives, a chance to live in an imaginary world for a while. I can’t express how much I appreciate the patience of my readers, and their support over the years it took to finish Midnight Sun,” said author Stephenie Meyer.

Midnight Sun is the long-anticipated retelling of Twilight from Edward Cullen’s point of view. The novel will be available in Trade Paperback and ebook, as well as an audio edition by Hachette Audio.

When Edward Cullen and Bella Swan met in Twilight, an iconic love story was born. But until now, fans have heard only Bella’s side of the story. At last, readers can experience Edward’s version in the long-awaited companion novel, Midnight Sun.

This unforgettable tale, as told through Edward’s eyes, takes on a new and decidedly dark twist. Meeting Bella is both the most intriguing and unnerving event he has experienced in his many years as a vampire. As we learn more fascinating details about Edward’s past and the complexity of his inner thoughts, we understand why this is the defining struggle of his life.

Twilight has enraptured millions of readers since its first publication in 2005 and has become a modern classic, redefining genres within young-adult literature and inspiring a phenomenon that has had readers yearning for more. Twilight was a Sunday Times and New York Times bestseller. The Twilight Saga, which also includes New Moon, Eclipse, Breaking Dawn, The Short Second Life of Bree Tanner: An Eclipse Novella, The Twilight Saga: The Official Illustrated Guide, and Life and Death: Twilight Reimagined, has sold nearly 160 million copies worldwide.

We are looking for a book-loving Account Manager, find out more if this job is right for you.