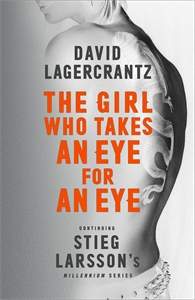 David Lagercrantz was born in 1962, and is an acclaimed author and journalist. In 2015 The Girl in the Spider's Web, his continuation of Stieg Larsson's Millennium Trilogy, became a worldwide bestseller, and it was announced that Lagercrantz would write two further novels in the series. He is also the author of the acclaimed and bestselling I am Zlatan Ibramhimovic, and Fall of Man in Wilmslow, a novel about Alan Turing.