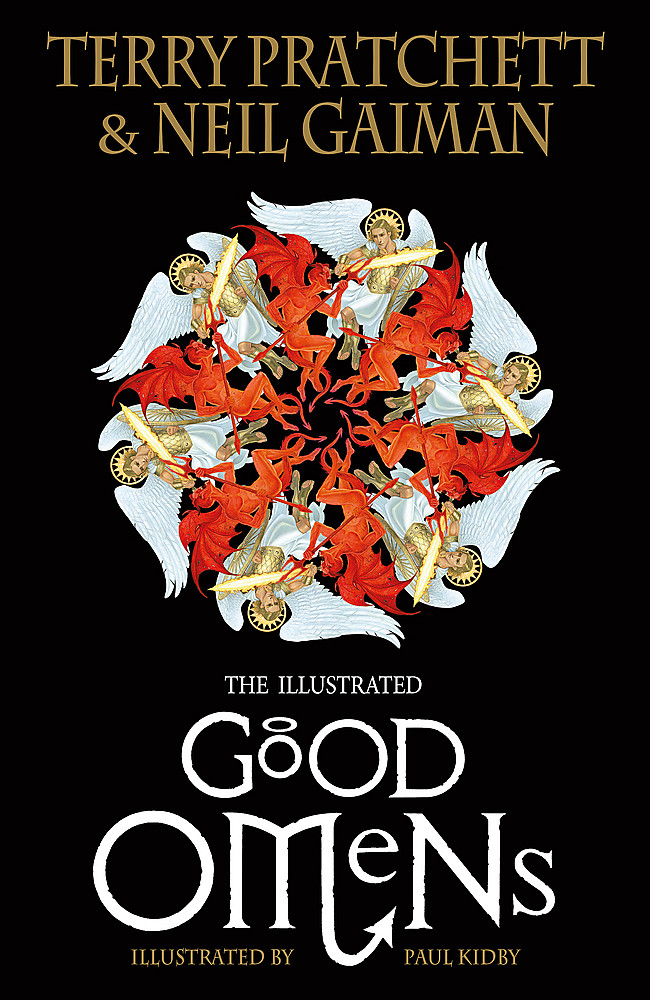 There is a hint of Armageddon in the air. According to the Nice and Accurate Prophecies of Agnes Nutter, Witch (recorded, thankfully, in 1655, before she blew up her entire village and all its inhabitants, who had gathered to watch her burn), the world will end on a Saturday. Next Saturday, in fact. So the Armies of Good and Evil are massing, the four Bikers of the Apocalypse are revving up their mighty hogs and hitting the road, and the world's last two remaining witchfinders are getting ready to Fight the Good Fight. Atlantis is rising. Frogs are falling. Tempers are flaring, and everything appears to be going to Divine Plan.

Except that a somewhat fussy angel and a fast-living demon are not particularly looking forward to the coming Rapture. They've lived amongst Humanity for millennia, and have grown rather fond of the lifestyle. So if Crowley and Aziraphale are going to stop it from happening, they've got to find and kill the AntiChrist (which is a shame, really, as he's a nice kid). There's just one glitch: someone seems to have misplaced him.This edition features a new revised text, approved by Neil Gaiman and the Pratchett Estate, which clears up many typos and errors from previous editions. It also features twelve full colour illustrations from Paul Kidby - Terry Pratchett's artist of choice - and further pencil drawings.

Sir Terry Pratchett is a publishing phenomenon. Among his many prizes and citations are the World Fantasy Life Achievement Award, the Carnegie Medal, the BSFA Award, eight honorary doctorates and, of course, a knighthood. In 2012, he won a BAFTA for his documentary on the subject of assisted suicide, 'Terry Pratchett: Choosing to Die'. He is the author of fifty bestselling books but is best known for the globally renowned Discworld series. His books have sold approximately 85 million copies worldwide (but who's counting?), and been translated into thirty-seven languages. In 2007, Terry Pratchett was diagnosed with early onset Alzheimer's Disease. He died in 2015.

Neil Gaiman is the internationally bestselling author of the Sandman series of graphic novels, FRAGILE THINGS, ANANSI BOYS, NEVERWHERE, STARDUST and CORALINE. He won the HUGO and NEBULA AWARDs for best novel with AMERICAN GODS. Born in the UK, he now lives in the United States. Follow him on Twitter at @neilhimself