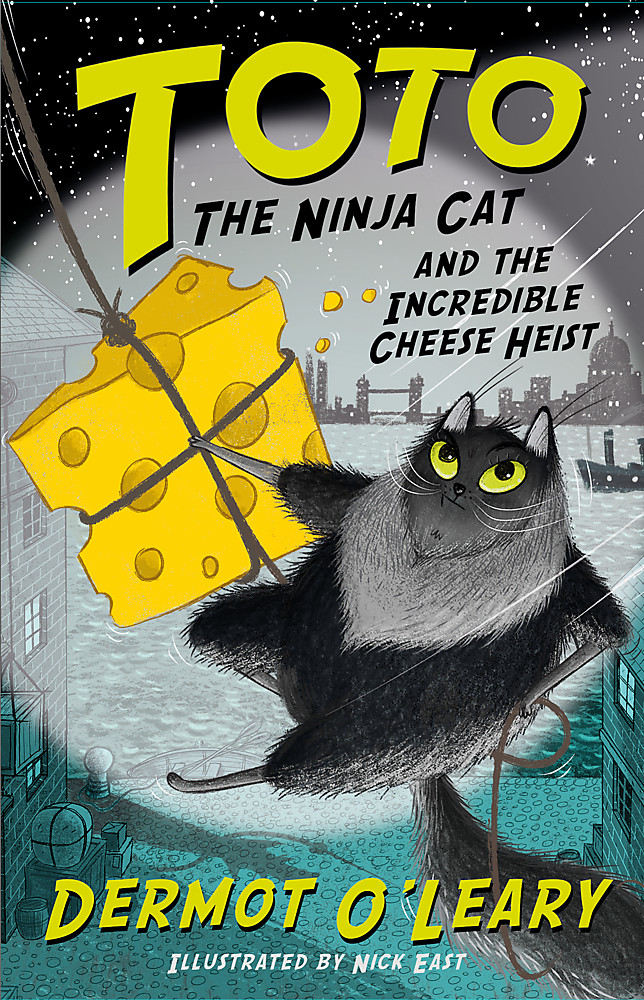 Toto the Ninja Cat and the Incredible Cheese Heist

Toto is no ordinary cat, and she can't wait for you to join her on her SECOND ninja adventure! From one of the UK's best-loved broadcasters, purrfect for fans of The Aristocats, The Secret Life of Pets and Atticus Claw Breaks the Law.

Toto, the amazing ninja cat, is back and cooler than ever! Toto is almost blind, but that doesn't stop her having brilliant adventures. Something CAT-ASTROPHIC has happened: ALL the cheese in the world has been stolen. Join Toto, her brother Silver and their best-friend Catface on a secret mission to save the day. Toto is going to need all her ninja skills to defeat the fur-midable cheese thief ...Ideal for reading aloud or for children to curl up with and read alone, the story features brilliant black and white illustrations throughout. With gentle themes of friendship, inclusivity and winning in the face of adversity, this is a hilarious must-read for all animal-loving kids! Dermot says: 'The idea for Toto first came to me when my wife and I rescued two stray cats from an olive grove in Italy. One of them, Toto, has been blind from birth, but we quickly realised she had ninja-like reactions. Like a lot of cat owners (or cat servants), we like to imagine our pets having secret lives when we're out or asleep. So before I knew it I was writing about Toto and her brother Silver's nocturnal adventures around London. I really hope that children who pick it up enjoy reading the adventures of our little Italian underdog (cat).'Have you seen Toto's other adventures? The Great Snake Escape and The Superstar Catastrophe are out now, and make perfect Christmas gifts for young readers.

Dermot started his career on T4 for Channel 4 and has presented shows for both ITV and the BBC. His best-known work includes The X Factor, Big Brother's Little Brother, Unicef's Soccer Aid, BBC3's First Time Voters Question Time, the RTS Award winning 'Live from Space' season and the Brit Awards. Dermot presents a Saturday morning show on BBC Radio 2, 'Saturday Breakfast with Dermot O'Leary'. Previously in the Saturday afternoon slot, 'The Dermot O'Leary Show' won three Sony Radio Awards. The show is produced by Ora Et Labora, the production company Dermot co-founded in 2008. Ora Et Labora also produces Rylan's BBC Radio 2 show, a number of podcasts and the TV show 'Reel Stories' for BBC2, looking back at iconic singers' lives on screen. Dermot has interviewed Kylie Minogue, Noel Gallagher and Rod Stewart on the show so far, with more episodes planned. A huge Ernest Shackleton fan, in 2019 he presented the 'Explorers' episode of BBC's 'Icons: The Greatest Person of the 20th Century'. Also in 2019, he launched an interview-based podcast, 'People, Just People' with Audible, featuring guests including Stephen Graham, Ed Miliband and Eni Aluko. Toto the Ninja Cat and the Mystery Jewel Thief is Dermot's fourth children's book. He lives in London with his wife Dee, their son Kasper and their cats Socks and, of course, Toto.You can find Dermot on Twitter and Instagram: @radiolearyNick East (Illustrator) Nick East is the illustrator of the bestselling TOTO THE NINJA CAT series, written by Dermot O'Leary. He is also the illustrator of Michelle Robinson's popular GOODNIGHT . . . series. He worked for many years as a museum designer but has always been a storyteller whether, as a child, filling sketchbooks with quirky characters or, as a designer, displaying a collection of ancient artefacts. Nick is based in York.